By: L. Black-Plumeau and M. Watson

A recent article in the New York Times suggested that Vermont is ranked first in the nation in vacant homes. This may be surprising to many Vermonters, given the state’s extremely tight housing market. Diving into the data more closely shows that the vast majority of Vermont’s vacant homes are seasonal or vacation homes, which are considered to be vacant under the Census Bureau’s methodology, but not necessarily available to buyers or renters.  Vacation homes have been prominent in Vermont’s housing stock for decades due to the state’s ski resorts and long-time desirability among tourists.  Vermont’s long-standing preponderance of seasonal homes offers a stark contrast to its extreme shortage of another type of vacant home—those for rent or sale. Only two other states had lower rates of these homes than Vermont in 2019. 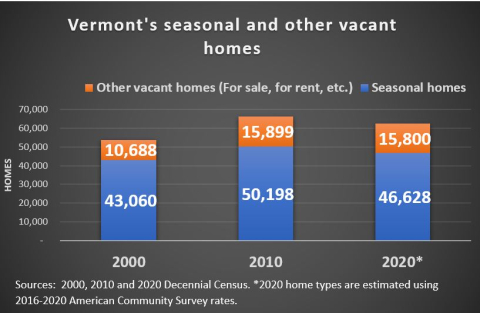 But what is a vacant home? The Census Bureau categorizes any home not occupied by a full-time renter or homeowner as vacant. Seasonal, occasional use, or vacation homes; homes for rent; homes used primarily as short term rentals; homes listed for sale; and homes under renovation are all considered to be vacant by the Census Bureau.

Seventy-five percent of Vermont’s vacant homes are “seasonal, occasional use, or vacation homes,” according to the latest American Community Survey estimates from the Census Bureau. These homes are either occupied by someone who usually resides elsewhere or were vacant during the Census survey but intended for seasonal, recreational or occasional use.

Vermont’s seasonal homes account for about 17% of the state’s total housing stock, according to the Census Bureau. Although the rate of seasonal or occasional use homes in Vermont has increased somewhat over time, it has always been high. In 1950 it was 9%, 15% in 1980 and 17% in 1990. Vermont is high-ranked among states in all of those years. Essex and Grand Isle counties have the largest share seasonal home rates in Vermont, but the towns with the largest shares are resort towns like Stowe.

While some of these seasonal homes could be converted to different types of usage, including being sold or rented to a household to live there full-time, many properties are unlikely to change status. At least some seasonal homes are unheated hunting cabins, lakeside camps with limited septic systems, or condominiums within ski resorts that are not suitable or not intended for year-round use.

Although the Vermont Department of Taxes also categorizes homes by type, it differs from the Census Bureau in the way it identifies “seasonal properties.” Instead of how much time a resident spends in the home, the state’s property Grand List uses a home’s physical characteristics to indicate if a property is “seasonal”, such as lack of insulation or heat.  For this reason, a home used as a second home by the current owner but that has the physical characteristics required for year-round living, is not likely to be categorized as a “seasonal property” in Vermont’s Grand List, according to a recent summary from the Vermont Joint Fiscal Office.

In contrast to its extremely high rate of seasonal homes, Vermont has an extremely low percentage of homes available for rent or sale compared to other states. Vermont is estimated to have had the third lowest housing vacancy rate in the country (2.4%) immediately before the pandemic. Vacancy rates are typically examined by comparing the number of homes for rent (or sale) combined with the number rented (or owned) but not yet occupied with the total number of homes in the housing stock. Rental and owner vacancy rates can be difficult to accurately measure. Because few homes are for rent or sale at any given time, it can be difficult for a Census Bureau survey taker to identify them. We will likely not have statistically reliable town-level rental and owner vacancy rate data for another few months, until the Census Bureau releases more detailed results from the 2020 Decennial Census. 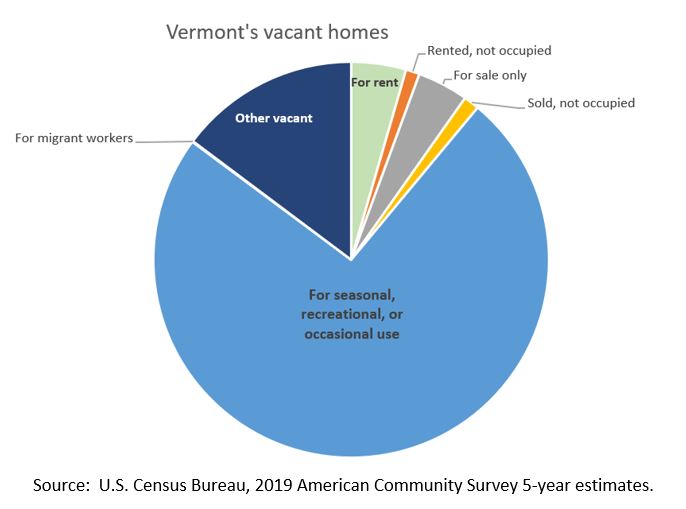 Among rental homes specifically, Census Bureau surveys suggest that Vermont’s vacancy rate was around 3.4%, pre-pandemic. Chittenden County’s was around 2% before the pandemic and appeared to be hovering around 1% in mid-2021, when local real estate firm Allen, Brooks and Minor did their own survey of that county. Experts usually think that a market is healthy when it has a rental vacancy rate around 4-8%. The national rental vacancy rate is currently around 5.6%.

Based on the state’s recent historic low in days on the home sales market and reported challenges for apartment seekers, it is likely that Vermont’s rental and owner vacancy rates have declined even further recently.

Next to seasonal homes, the largest vacant home group counted by the Census Bureau is “other vacant” homes. Homes can fall into this category for many reasons, including homes that are under renovation or homes held vacant for personal reasons of the owner. However, since this category can also include foreclosed or abandoned homes, it is often used by housing researchers as an indicator of area housing stock decline. Although Vermont’s rate of “other vacant” homes is lower than the national average, examining this indicator by town can flag potential local housing problems, such as the high rate of these homes in Rutland in 2019.

Understanding what a vacant home means is essential to interpreting the data and to make policy recommendations. The renter, owner and vacation home markets have both overlapping and separate dynamics that must be considered in context to develop policies that can make housing more affordable for Vermont households.

*The New York Times report that ranked Vermont first in the country in vacant homes is based on an analysis by LendingTree, which says that its methodology is based on “the U.S. Census Bureau’s 2020 American Community Survey with one-year experimental estimates”.  This methodology could not be verified by VHFA. The Decennial Census data cited above is widely regarded as a more comprehensive survey of Vermont’s households than the American Community Survey.